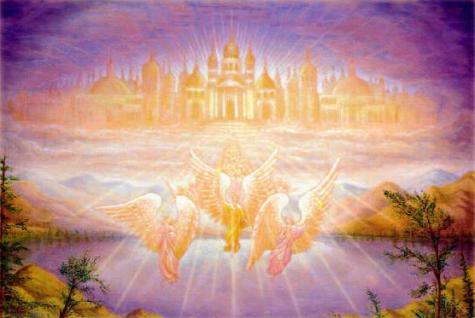 When we think of a friend, partner, child, lover, teacher or family member, an image of that person is called up, or appears in our awareness. In our mind's eye, we can see the face of our loved one, and we can even smell that special essence that sets them apart from everyone else. Along with our memories of this person, and our feelings for them, if you look closely there is something else that is being observed or experienced simultaneously. We shall call that extra something the ‘subtle, or light body’.

On a deeper level of feeling, our nerves tingle and our heart moves in and towards this person. In those moments we share a connection with that person, even if we are separated by 9000 miles and 9 times zones. Sometimes we see the person within our awareness almost as clearly as if we were standing in the same room having a wonderful conversation. And, at other times the feeling is vague. It depends on our personal clarity, in the moment, just what we can see or sense.

Over the millennia various cultures have put names like clairvoyance, clairaudience, intuition, far-seeing, second sight and inner vision to these experiences. Authors like Taylor Caldwell and Joan Grant have written entire novels through these subtle mechanisms, or abilities to ‘see events and experiences’ that have existed in some near or distant past. We can begin to understand that these experiences are just examples of expanded, or higher states of human awareness or consciousness. In America in the early part of the 20th century, one of the most documented ‘sensitives’, mystics or psychics was Edgar Cayce. He gave over 40,000 'subtle or light body readings' for people while in a more expanded state of consciousness. The documentation of his work stands like a light to the study and understanding of expanded human awareness.

Growing up in America in the 1950’s the only ‘state of consciousness’ anyone spoke about was what was happening while we were awake, and doing something. At that time, consciousness was understood as just a mechanism one needed and used in order to earn a paycheck. In the last few decades, the definition of consciousness has undergone quite a change due to two important factors: medical technology and access to the ancient wisdom from around the world. Technology has brought amazing advances in real-time brain mapping, and even the most intricate physical processes are coming to be understood on the level of the gene itself.

It has been technology that has begun to prove the existence and development of a higher human consciousness as revealed by the ancient cultures, and reveled by respected teachers, such as Maharishi Mahesh Yogi, who brought Modern Science and Vedic Science into the same room. As a result there have been thousands of medical and neruro-physiological studies published on the value of meditation when added to our busy modern lives. These studies and international conferences have helped reawaken a more complete and modern understanding how human consciousness develops from its individual to more expanded and even universal values.

There are many forms of meditation in the world, and all of them provide the student with access into a quieter and more profound state of consciousness. It is in these higher states of consciousness where the experiences are reported of the inner light and subtle light mechanisms are perceived functioning within the human body.

The ‘subtle or light body awareness’ is what the medical intuitive, sensitive, psychic, medium, seer, visionary, mystic, monk, nun, housewife and business woman, house-husband, worker and pizza delivery person uses as an extension to their ordinary five outer sense orientated human awareness. These inner abilities can be developed just like any other physical, creative, intellectual ability in our lives. Some people are born with them, and others develop them through their life experience and spiritual practices to systematically awaken and unfold their fuller potential of consciousness.

What we need now is a clear intellectual understanding of these processes and inner regions or life and light. This process of a higher Self-realization is a two part process: first, a direct experience into these subtle realms is necessary; and secondly, a proper intellectual understanding of these realms and how they relate and interact with our more ‘ordinary’ view of reality is necessary.

I see this energy field glowing in and around everything. Life seems to be composed of layers from the surface, to the molecules, atoms and energy within the subatomic regions of life. We need to learn how to tune into each refining layer. Like focusing a lens on a camera to capture or highlight a certain depth of the field, human awareness can learn to focus on successively refined levels of energy in and around the human body. These refining levels are what is commonly called the aura, though in reality it is also could be described as interacting electromagnetic energies.

When experiencing the aura, what many sensitives see or sense here are the astral, or emotional layers of energies. This 'field' extends about one yard all around the body in an oval shaped energy cloud. Contained herein is the sum total of all emotions, conscious or not, which a person has created and continues to create. It is an astral blueprint that can be read. This is what I am going to refer to as the emotional aura or background energy.

We understand physical houses. It has a defined physical structure that can be changed, but takes a lot of work to do so. If you add paint to a wall, that color will remain until you remove or paint over it. You can coordinate picture frames, vases on the coffee table, textures on the floor or perhaps even the walls. In the same way we can understand how our emotional field contains memories, structures, colors and forms that we have placed there over a number of years as we develop emotionally through relationships and just growing up.

Some of these patterns will positively support our self-identity while others will erode the integrity and hopefulness of our life dreams. Like an old Victorian home, the walls often get heavy with multiple layers of wall paper or many generations of paint. At some point in time, these layers will have to get taken off, or the heaviness of these layers will make it hard for anyone to live there.

Everything in this world needs to get freshened up on a regular basis: the body, clothing, attitudes, belief systems, relationships and even how we describe the life around and within ourselves. Nature recycles and so must we. It is our job to keep all levels of our life up to date and fully functioning; physical, emotional, mental and spiritual.

In order to successfully accomplish this inner and outer growth, we need to look and acknowledge our strengths and our weaknesses. Great freedom will be gained on all levels of life when we stringently review the patterns which hold us back. This review will reveal old patterns of doubt and despair and insecurity and negativity that have been pulling us down for many years. These energies are dangerous. In a campground, we first show our children where snakes, scorpions and spiders live, so that they know where not to play. We need to look into the dark places inside of ourselves so that we can reintroduce a flow of life energy to these areas which have been sequentially closed down over the course of a relationship, job or a lifetime.

All patterns of energy will eventually manifest more concretely into subtle body energy structures. In the course of time, these subtle structures, which show up as geometries, densities and colors in the subtle bodies, will cross the energy barrier and become physical. These ideas may help our understanding of how imbalances turn to illnesses which can deepen into disease. It is more easy to purify and transform an energy pattern as compared to a physical disease. It is easier to change the blueprint design with an eraser of a mouse button before the builder puts up the insulation and wall boards.

We are all voyagers on a inner ship similar to the Beagle of Darwin's era. We are explorers, and what we find within ourself will take a lifetime to properly understand. This is a great life journey that requires both an inner exploration and outer development in order to integrate the full potential within each of us.

When your attention wakes up on these finer levels, you will begin to become familiar with the beings who live there and call these worlds home. We have our home-world, and so do they. We are of the human race and they are from the angel race. The main difference is that all human beings live in or on the same plane of existence. Angels, on the other hand, live in worlds of light and mansion worlds which, as both the masters of the far east and Christian doctrine say, straddle nine planes of refining existence up to the Celestial worlds, or the 'kingdom of heaven' itself.

My book 'Angel's Whispers' begins to present these preliminary ideas, and shared experiences, and subsequent volumes will go into more detail of these planes of existence.